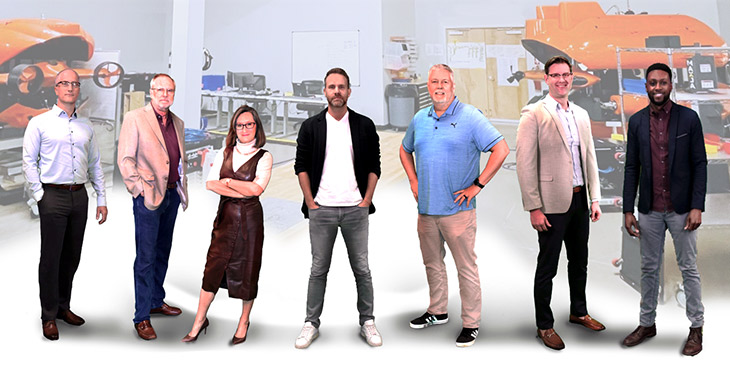 You are cordially invited to join Vista Partners’ sister organization, Tribe Public, for a FREE Webinar Presentation and Q&A Event which will be held today, Thursday, January 11 (8:00 am PT/ 11:00 am ET). Tribe Public’s (www.tribepublic.com) complimentary worldwide webinars are efficient 30-minute events that seek to provide direct corporate access to leaders of companies in industries that Tribe’s members care about and requested. Tribe events typically consist of a quick introduction to management where they share their background, a 15-minute presentation, and a brief 5-10 minute Q&A session that you direct by sending questions for management to email: research@tribepublic.com or forward to during the event via the zoom chat feature for the moderator to direct. 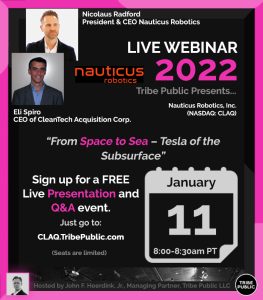 Today’s event will be co-hosted by Nauticus Founder, Chairman & Chief Executive Officer, Nicolaus Radford & Eli Spiro, CEO of CleanTech Acquisition Corp who will deliver a presentation titled “From Space to sea – Tesla of the Subsurface”. You may register at CLAQ.TribePublic.com.

The event will speak, in part, to the overall oceanic economy, which counting both the seas and the shores, amounts to $2.5 trillion per year. Did you know that if the ocean were a country, it would have the seventh-largest GDP on Earth? That number could continue to grow — but only if our planet’s many seas remain in good health.

We will also learn about Nauticus Robotics & their world-class team that is composed of ex-NASA engineers that develop revolutionary cloud-based autonomy software to enable a smarter and more sustainable ocean industry using its fleet of autonomous robots from the surface to the seabed. These robots are enabled by the Nauticus Software Suite, a platform of AI/ML technologies designed to disrupt the legacy methods in the marine industry. Its first product offering, Aquanaut, is the world’s first tetherless underwater robot capable of robust decision making for both long distance ocean data collection and close-in dexterous manipulation of the subsea environment, supporting government & defense and other commercial industry sectors. Nauticus’ software, robots, and services provide customers the necessary data collection, analytics, and subsea manipulation capabilities to support and maintain assets, while significantly reducing their operational and carbon footprints to improve offshore health, safety, and environmental exposure. 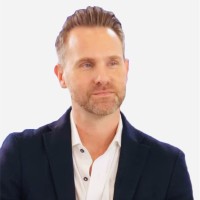 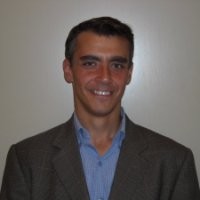 Eli Spiro has over 23 years of capital markets experience. Mr. Spiro is currently the Chief Executive Officer of Axxcess Capital Partners, a boutique investment banking firm he co-founded in 2010. At Axxcess, Mr. Spiro has closed over $1.5 billion of transactions since inception. He was involved in a number of transactions in the clean energy space including his role as President of Axxcess Energy Group, investing in a business applying proprietary technology to reduce energy expenses. Mr. Spiro was also involved in the development of an organic, hydroponic greenhouse business producing leafy greens. He worked with clients on several multi-stage waste-to-energy projects that focus on transforming waste to energy to end products and services, as well as carbon credit mitigation and monetization. Notable public transactions that Mr. Spiro led include Facebank -buyside advisor in conjunction with acquisition of FUBOTV (NYSE:FUBO) and Service Finance — sellside advisor in connection with its sale to Element Capital (TSX:ECN). Prior to Axxcess, Mr. Spiro was an investment banker at Goldman Sachs where he was a Vice President in the Financial Institutions Group advising multiple clients on sellside and buyside M&A transactions. Prior to Goldman Sachs, Mr. Spiro was Managing Director & National Sales Manager at GE Commercial Finance. He was responsible for over $4.2 billion of high-profile acquisitions across a number of GE Capital business units. Mr. Spiro received his B.AS. in Business Administration from York University in Toronto and received his joint LLB/MBA from Osgoode Hall Law School and the Schulich School of Business in Toronto. 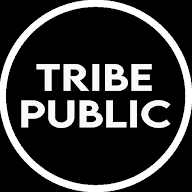 You may register for this complimentary event at CLAQ.TribePublic.com.

On Dec. 17, 2021 Nauticus Robotics, Inc., a Houston-based developer of cloud-based surface and subsea robots, software, and associated services, and CleanTech Acquisition Corp. (NASDAQ: CLAQ), a publicly traded special purpose acquisition company, today announced that they have entered into a definitive business combination agreement that will result in Nauticus becoming a publicly listed company.

Upon closing of the transaction, CLAQ will be renamed Nauticus Robotics, Inc. and is expected to remain listed on NASDAQ under the new ticker symbol “KITT” (the “Combined Company”).

Nauticus develops revolutionary cloud-based autonomy software to enable a smarter and more sustainable ocean industry using its fleet of autonomous robots from the surface to the seabed. These robots are enabled by the Nauticus Software Suite, a platform of AI/ML technologies designed to disrupt the legacy methods in the marine industry. Its first product offering, Aquanaut, is the world’s first tetherless underwater robot capable of robust decision making for both long distance ocean data collection and close-in dexterous manipulation of the subsea environment, supporting government & defense and other commercial industry sectors. Nauticus’ software, robots, and services provide customers the necessary data collection, analytics, and subsea manipulation capabilities to support and maintain assets, while significantly reducing their operational and carbon footprints to improve offshore health, safety, and environmental exposure.

Nauticus operates in the $2.5 trillion ocean economy where it targets the rapidly expanding multibillion dollar bluetech robotics, data, and services market with a disruptive product offering. Some incumbent solutions utilize large vessels that can have severe drawbacks, including operating costs that can reach as high as $100,000 per day with large fuel emissions of up to 70 metric tons of CO2 per day and largely utilize antiquated, maintenance-heavy, hydraulic machines with little to no advanced technologies. In contrast, Nauticus’ expected service pricing would save customers over 50% compared to traditional methods while eliminating nearly the entire greenhouse gas emissions with a significant reduction in required onsite personnel needs.

The Company’s estimated revenues in 2021 are approximately $8.2 million, with strong visibility to achieve robust growth in subsequent years, including currently contracted orders that would more than double revenue in 2022. Nauticus’ robotic systems and services will be delivered to commercial and government-facing customers primarily through a Robotics as a Service (RaaS) business model but could also include strategic partnerships for unit sales. The strong unit economics of the RaaS model target long-term corporate EBITDA margins of approximately 60%.

Radford said: “The passion and conviction of our team at Nauticus has fueled the creation of a truly disruptive and innovative company in the ocean space, and we are eager to take the next step in our growth trajectory as a public company. A substantial core of our team has been together, first starting at NASA and now at Nauticus for 15 to 20 years and I am inspired by their relentless pursuit toward this dream. Their talent and efforts are second to none and I could not be prouder of what we have and will accomplish. The ocean will be the epicenter in our fight against climate change and the offshore ocean services industry has signaled the beginning of a major technology revolution to combat it. Toward that end, we have brought to market a suite of products and services that can make a significant impact on our customers’ cost profile, carbon footprint, and safety by reducing the reliance on costly and carbon intensive surface assets that traditionally service the many sectors of this industry.”

Eli Spiro, CEO of CLAQ, commented: “CLAQ was created to find a great business that has a positive impact on the world’s carbon footprint. We set a high bar for ourselves and could not be more impressed with Nic and the entire Nauticus team. We believe Nauticus’ RaaS model has the potential for strong returns while operating in a market in dire need of disruption. The high caliber of partners and investors Nauticus has attracted, including blue-chip customers in the offshore industry, is impressive and we believe this validates their technology and solution. On a personal note, it has been a tremendous pleasure to get to know and work with Nic – he’s a true leader and has been an inspiration to all of us at CleanTech throughout this transaction.”

Transaction Overview
The pro forma equity valuation (assuming no redemptions) of the Combined Company is expected to be approximately $561 million. Estimated cash proceeds to the Combined Company from the transaction are expected to consist of CLAQ’s approximately $174.2 million of cash in trust (assuming no redemptions) and approximately $73 million from a fully committed Private Investment in Public Equity (“PIPE Investment”) in equity and convertible notes anchored by existing investors. Proceeds from the fully committed PIPE Investment fully cover the minimum cash requirement for the transaction, reducing potential transaction uncertainty.

The board of directors of each of CLAQ and Nauticus approved the transaction, which is expected to close in the first half of 2022. The transaction will require the approval of the stockholders of CLAQ and is subject to other customary closing conditions including the receipt of certain regulatory approvals. The transaction will also require the approval of the stockholders of Nauticus. Stockholders holding the requisite vote of Nauticus have executed a support agreement and have agreed to vote in favor of the merger and related transactions by unanimous written consent or at a meeting of stockholders when called by Nauticus.

Additional information about the proposed transaction, including a copy of the business combination agreement and investor presentation, will be provided in a Current Report on Form 8-K to be filed by CLAQ with the SEC and available at www.sec.gov. 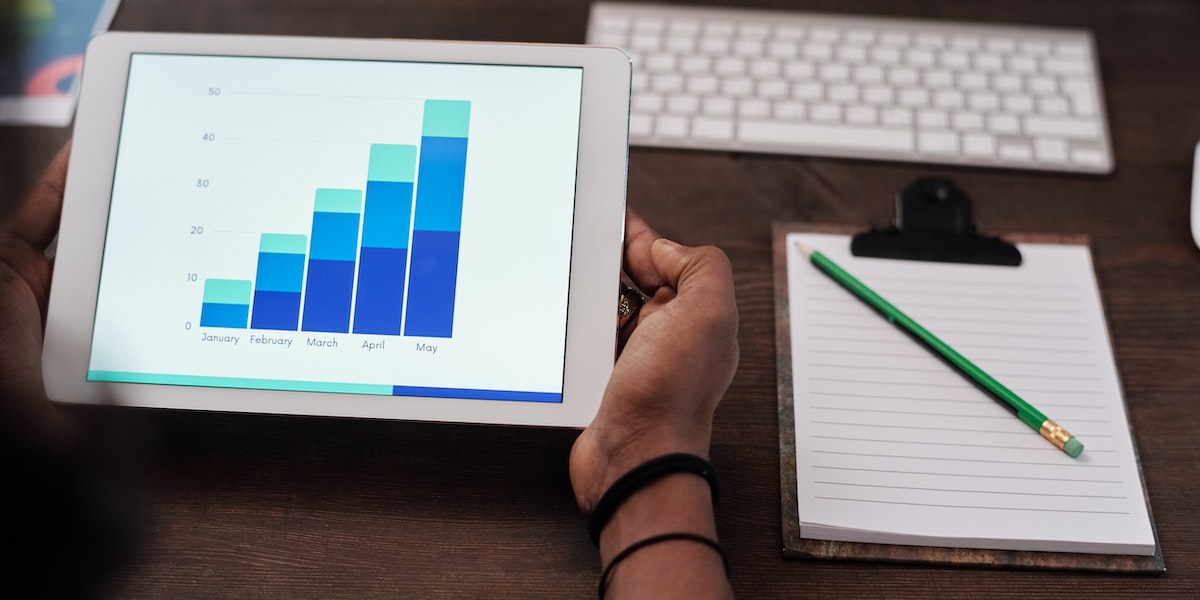 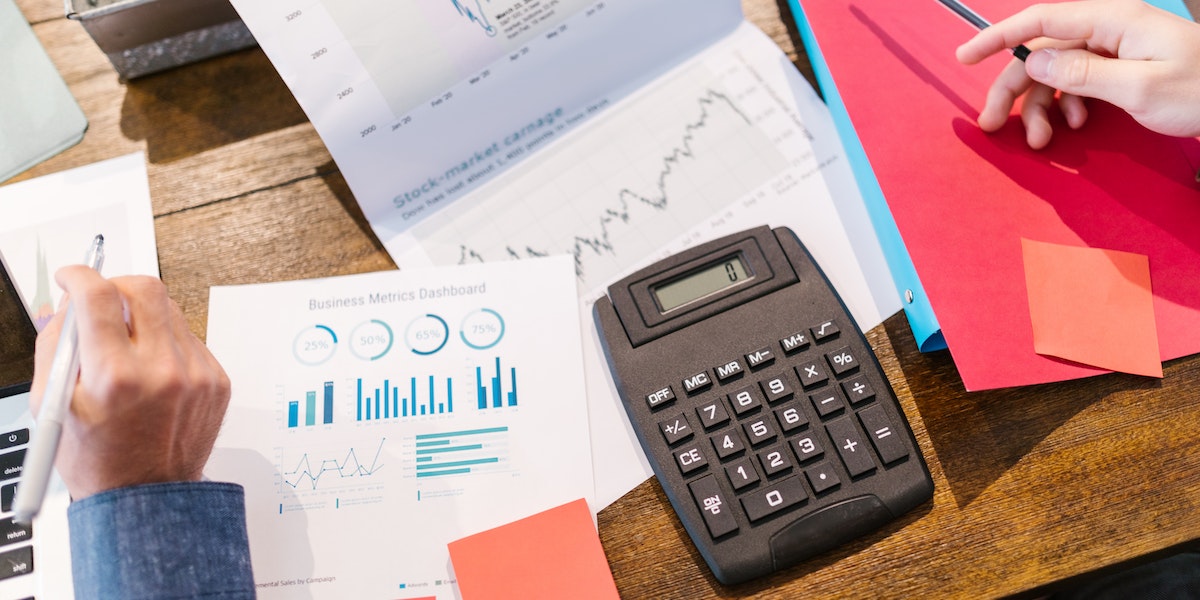 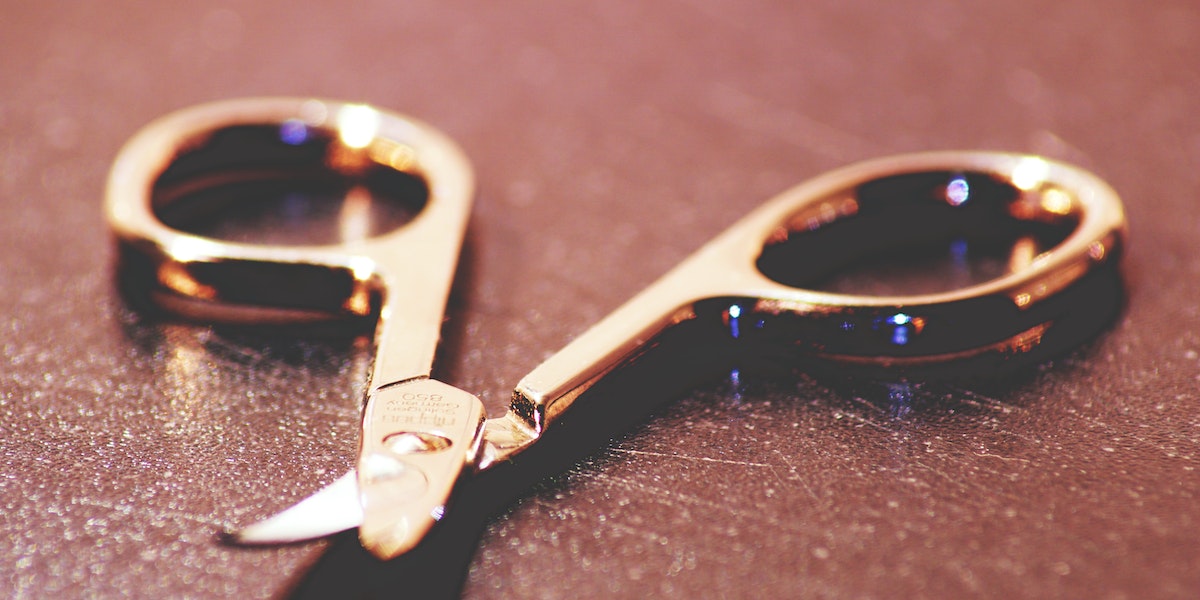 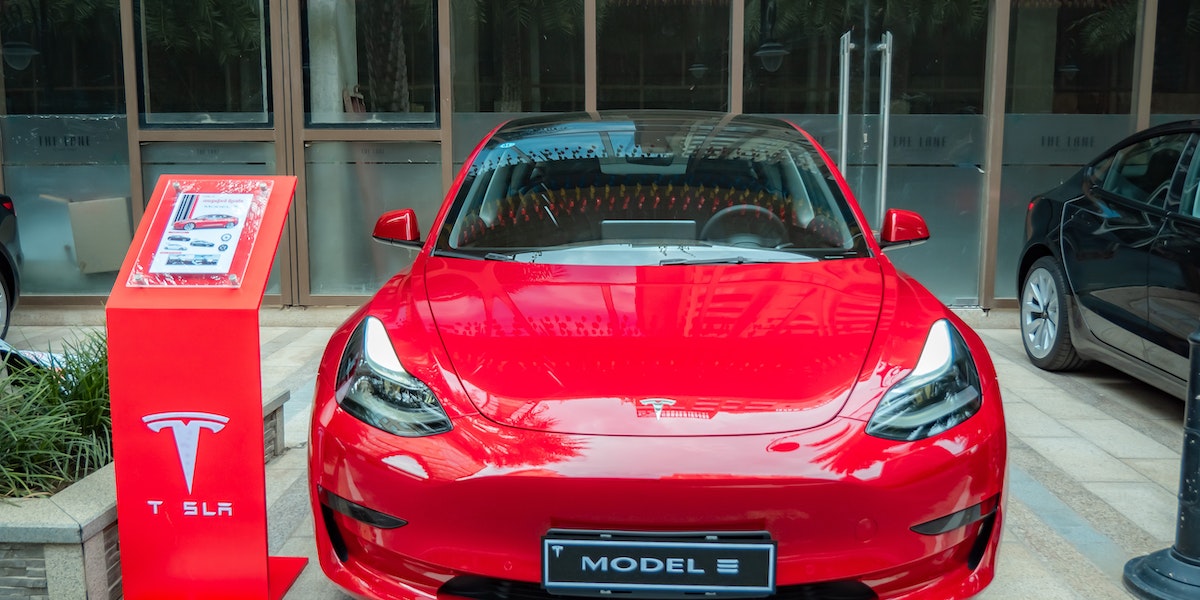 Tesla Cut Prices Of Some Models...