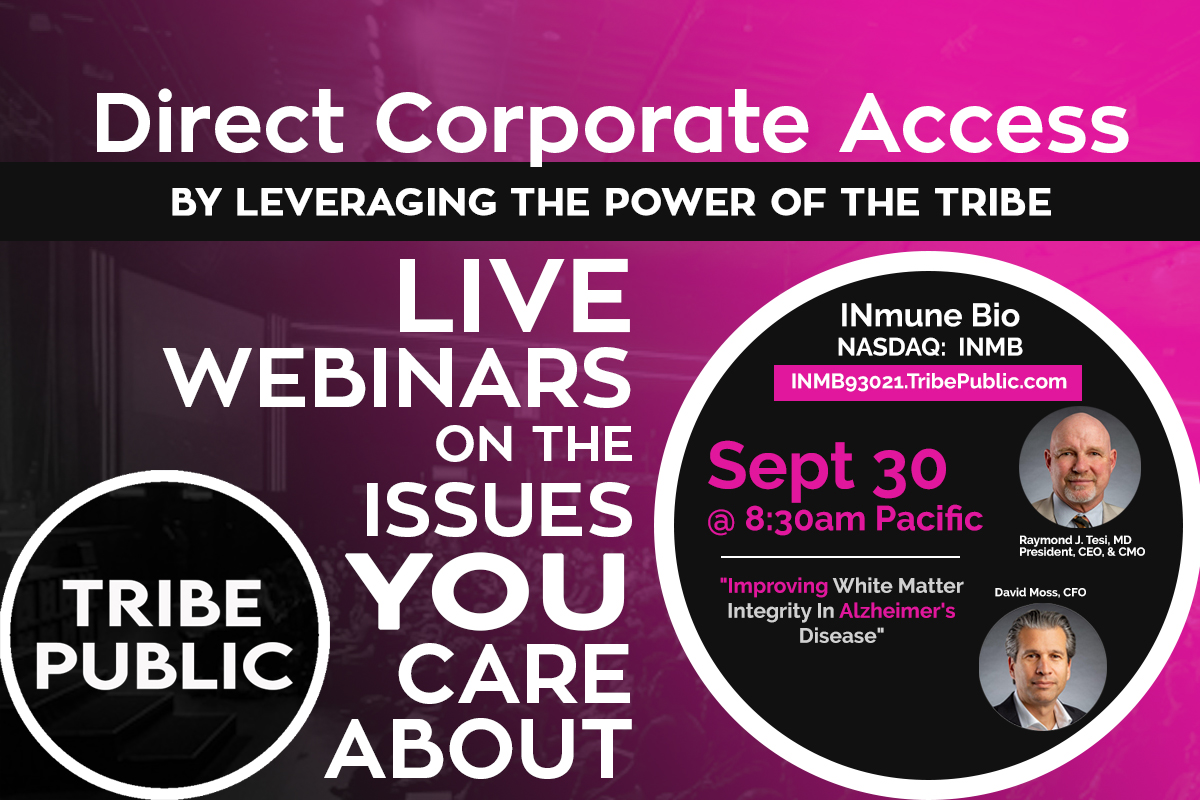 Alzheimer’s Disease is an immunologic disease with the neurological symptoms of dementia and psychiatric dysfunction. Unfortunately, the onset of Alzheimer’s is all to common as we advance in age and it is estimated that by mid‐century, the number of Americans age 65 and older with Alzheimer’s dementia may grow to 13.8 million.

You are cordially invited to join us at a FREE Tribe Public Webinar Presentation and Q&A Event which will be held this week, Thursday, September 30 (8:30 am PT/ 11:30 am ET). INmune Bio’s (NASDAQ: INMB) CEO Dr. Raymond J. Tesi, MD and CFO David J. Moss will deliver their presentation is titled “Improving White Matter Integrity In Alzheimer’s Disease” & and be available for a brief Q&A session.  Please register at INMB93021.TribePublic.com for the FREE (~30-minute) Tribe Public Event that begins at 8:30am PT – 11:30am ET today, September 21!

Tribe Public (www.tribepublic.com) is our sister organization that conducts complimentary worldwide webinars that are efficient 30-minute events that seek to provide direct corporate access to leaders of companies in industries that Tribe’s members care about and have requested. Tribe events consist of a quick introduction to management where they share their background, a 15-minute presentation, and a brief 5-10 minute Q&A session that you direct by sending questions for management to email: research@tribepublic.com or forward to during the event via the zoom chat feature for the moderator to direct. 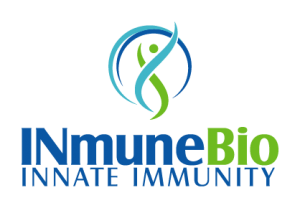 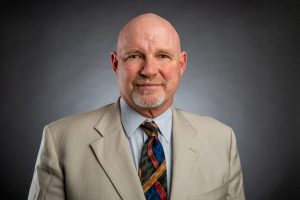 Dr. Tesi has been our President, Chief Executive Officer and acting Chief Medical Officer since the formation of the Company in September 2015. From November 2011 to May 2015, Dr. Tesi was CEO, President and Acting Chief Medical Officer of FPRT Bio Inc., a development-stage biotech company formed to develop XPro1595 for the treatment of neurodegenerative disease and other inflammatory diseases. From November 2010 to October 2011, Dr. Tesi was Chief Medical Officer of Adienne SRL, an emerging biotech company in Bergamo, Italy focused on products to treat patients with hematologic malignancy. From June 2007 to September 2010, Dr. Tesi was CEO and President of Coronado Biosciences, a company he founded. Dr. Tesi received his MD degree from Washington University School of Medicine in 1982. Dr. Tesi has been a licensed physician since 1982 and Fellow of the American College of Surgery since 1991. 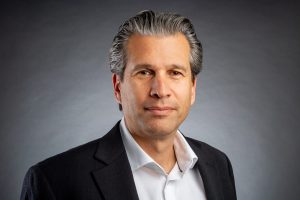 Mr. Moss has been CFO since the formation of the Company in September 2015. Mr. Moss has founded, funded and taken public various companies in a variety of industries since 1995. Mr. Moss was a founding investor in Reliant Service Group LLC, which was acquired in 2015 by a leading private equity firm. Mr. Moss previously served as Managing Director, Corporate Finance for a New York-based securities firm, where he advised companies on corporate strategy, financings and business development. Prior to that, he served as Managing Partner at a Seattle-based venture capital firm. Mr. Moss holds an MBA from Rice University and a BA in Economics from the University of California, San Diego. 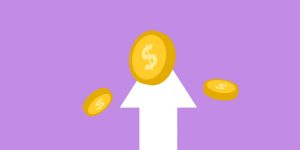 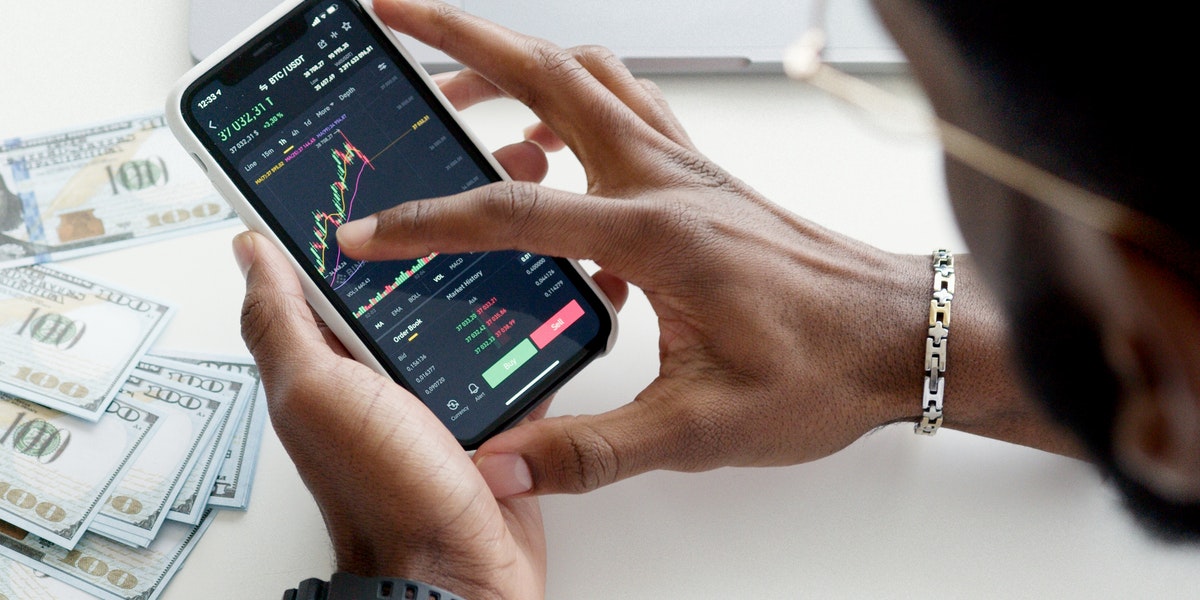 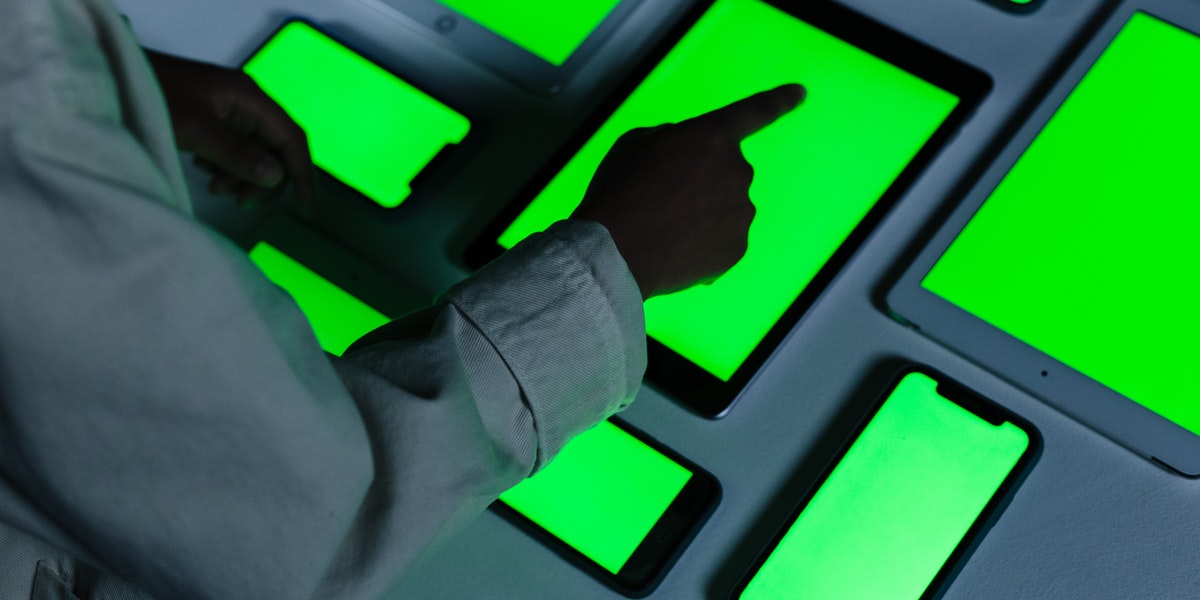